If you are having trouble using the system, please try our help guide.

88. Solihull has an enviable record of promoting and delivering growth in a way which enhances the Borough whilst at the same time not undermining the characteristics that make it special and attractive to investment.  The spatial strategy will continue to manage growth and protect these characteristics.

89. The 2013 Local Plan incorporated a spatial strategy that was based on a housing target that reflected the emerging requirements from the revisions to the Regional Spatial Strategy.  This was a target that was 'constrained' and wasn't meeting the Borough's own needs.  Furthermore it didn't accommodate any of the shortfall that was beginning to occur across the housing market area[11].  This plan seeks to do so by not only accommodating the Borough's own needs, but also in making a contribution towards accommodating some of the shortfall from the housing market area.

90. At the time the 2013 plan was being prepared, the plans for HS2 had not reached an advanced stage.  The plan acknowledged that the high speed rail link could play a key role in the future growth of the Borough, but at the time it would have been wrong to assume its development.  Now is the right time to do so with the expectation that Royal Assent for the Bill will be given whilst consultation on this draft plan is underway.  The arrival of the high speed link will have a profound effect on the Borough and this local plan review must address how its benefits can be maximised.  This is in the context of the unique opportunity that is available to do so; with the interchange being located at the heart of the Boroughs key economic assets and transport infrastructure.

91. The two factors outlined above represent a significant shift from the starting point of the 2013 plan and requires the spatial strategy to be looked at afresh.  This is in the context that to deliver the level of growth envisaged, will require significant releases of land from the Green Belt.  Solihull is not alone in having to accommodate development within the Green Belt - there are examples within the same housing market area where this has had to be undertaken.

92. The Strategy seeks to develop the potential of each part of the Borough to contribute to the growth agenda through a place making approach aimed at enhancing Solihull as a place where people aspire to live, learn, invest, work and play; whilst recognising and protecting character and local distinctiveness. This includes realising the potential of the UK Central Area to drive growth and recognising the needs and growth potential of all communities in the Borough.  Opportunities for development to meet these needs will be balanced with the importance of protecting the Mature Suburbs and the open countryside within the Solihull Green Belt.

93. The Scope, Issues and Options consultation indicated that whilst many elements of the spatial strategy in the Local Plan 2013 remained relevant, the Review is being undertaken in a different strategic context and needs to accommodate a substantial increase in the level of growth to be accommodated. A significant number of representations considered that the 2013 spatial strategy was no longer appropriate, as it needed to be amended to reflect the increased emphasis on economic and housing growth.  Whilst this is accepted, it would not be right to suggest that accommodating growth at all costs is an appropriate response.  Rather the balance between these potentially competing demands needs a shift towards accommodating additional growth – in a managed fashion; and provided an appropriate balance is maintained (by ensuring a sustainable pattern of development is achieved), this would be an acceptable approach.

94. In order to update the Spatial Strategy some 'strategic objectives' have been developed.  These can then be used to help determine the locations where growth should be directed towards.  As a supplement to these strategic objectives, some 'guiding principles' have also been developed which can be used when assessing individual sites or locations as to whether they should be allocated in the plan.

95. The purpose of the strategic objectives is to ensure that a strategy is arrived at that makes effective use of land and creates a pattern of development that focusses significant development in locations that are, or can be made, sustainable.

96. The strategic objectives set out a sequential approach to directing growth in locations as follows:

i. Previously Developed Land – if highly or moderately accessible location.

ii. Greenfield - if not in reasonable beneficial existing use (e.g. avoid loss of open space, unless compensated for) - if highly or moderately accessible location.

i. Previously Developed Land – if highly or moderately accessible location

ii. Greenfield - if highly or moderately accessible location and is being lost as a result of committed development.

97. This hierarchy has been adopted to ensure that first preference is given to appropriate sites not located in the Green Belt, and only then sites that are located in the Green Belt.  This also has the advantage that most non-Green Belt land is likely to be in a highly or moderately accessible location (i.e. within the urban area or within an existing settlement[12]).

98. This reflects the guidance in the NPPF. Mostly notably core planning principles under the 8th and 11th bullet points of paragraph 17.

100. This balanced approach between concentration and dispersal has a number of advantages:

101. Therefore the following additional criteria are suggested for category (b) (iii) so that development will be focussed in locations which are:

102. This approach would thus discourage development that is:

103. In addition to the strategic objectives outlined above, some guiding principles have been identified which can be used to help identify locations where development can be appropriately located, and locations where development should be discouraged.  Both the strategic and guiding principles can then be used to assess broad options identified in the Scope, Issues and Option consultation, together with assessing the call for sites submissions/SHELAA outputs.

104. The guiding principles fall into two categories, either a consideration that may be in support of a particular location/site or one that would indicate that the location/site is not supported.  Often there will be a balance to be struck and these considerations should be seen in the 'round' rather than simple isolated assessments.

Guiding Principles Generally Not in Support

105. The Scope, Issues and Options consultation set out 7 broad options for accommodating growth as follows[13]:

106. It is considered that the strategic objectives and guiding principles outlined above are sufficient to enable opportunities/proposals that may come forward under options A to D to be appropriately assessed, particularly those that can be accommodated in the urban area without needing land to be released from the Green Belt.  However, for options E, F & G it is thought that it would be helpful to set out in a spatial manner the outcome of an exercise that has looked at the options for accommodating growth against the objectives and principles identified above.

107. Using the LPR evidence base (including the Green Belt Assessment, accessibility mapping and constraint mapping), areas of opportunity for development in accordance with options E, F & G have been assessed.  This included looking along the urban edge for opportunities for a large scale urban extension; and looking around the edge of the settlements in the rural area for either limited or significant expansions of them.  This exercise is undertaken and explained in full in the 'Reviewing the Options for Growth and Site Selection Process Topic Paper'.  The result is an indication as to the areas where development should not be located and land retained in the Green Belt; and areas where development should be focussed and land released from the Green Belt to allow this to occur.

108. This exercise has revealed that appropriate growth opportunities are available under these options.  The locations where growth should be focussed and land released from the Green Belt are as follows:

109. These growth locations are shown in the following diagram: 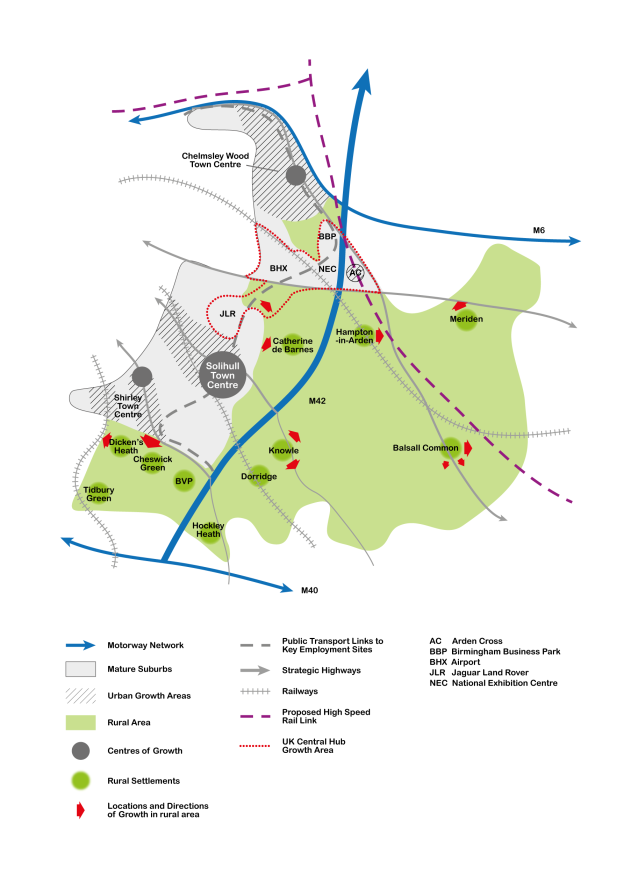 (248) 3. Do you agree with the spatial strategy we have set out?  If not why not, and what alternative would you suggest?

[11] Although it was noted that evidence was emerging, this had not been advanced far enough to be directly accommodated in the 2013 plan, but it warranted a modification to acknowledge that this may be sufficient to trigger an early review of the plan.

[12] Although the accessibility of settlements does differ (as does the range of services they provide), it is not anticipated that opportunities for significant development within their exiting boundaries will come forward.

[13] It should be noted that individual development opportunities/proposals could fall into more than one of the options identified.

If you are having trouble using the system, please try our help guide.
back to top back to top